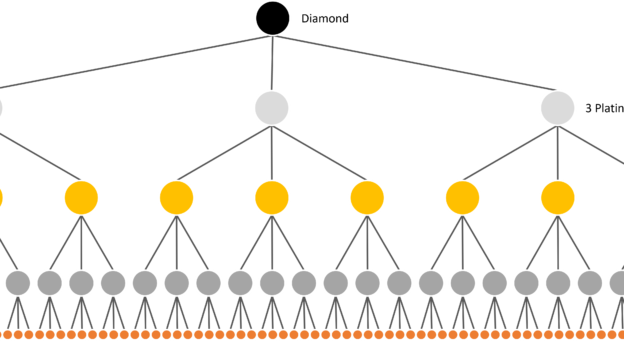 With some MLM compensation plan designs, it’s obvious that the company is going to have a problem down the line. Today I want to talk about one of the ways companies set themselves up for failure. How? By turning their distributor tree into a house of cards.

Let’s imagine an MLM compensation plan with five ranks: Copper, Silver, Gold, Platinum, and Diamond. Each rank has a personal sales volume (PSV) requirement. For Copper, PSV is the only requirement. But there is also a structural requirement at each higher level:

If your plan looks like this, you’ve built yourself a disaster.

Sure, everything matches and looks nice on paper, and it’ll be easy for your distributors to understand. But make no mistake. This is a house of cards. If you get just one crook in the tree who’s willing to take himself out to hold the upline hostage, that one guy can topple the tree. How?

Let’s say distributor A climbed the ranks all the way to the top rank of diamond. (In this story, I’ll play the honest distributor.)

In fact, she has to have a total of 120 people qualified at specific ranks and positioned in a specific configuration in her downline (3 Platinums, 9 Golds, 27 Silvers, and 81 Coppers). It just so happens that for her to have those three Platinums, all those other people have to be there too.

How the house of cards falls

Now imagine this Silver is crooked.

He realizes he can hold distributor A hostage by skipping his monthly order, and failings to hit his PSV requirement. Now distributor A’s house of cards is missing one critical Gold and the whole thing collapses. She loses her rank and the bonus that comes with it. What options does she have? How can she rebuild her house of cards?

She can pay the non-qualifying gold whatever his price is to get him to place his monthly order and reach his PSV requirement. What else can distributor A do?

She can go build out another entire leg. Can she do that before the end of the pay period? Nope! Not with real people anyway. She might be able to create a fake leg full of dummy accounts and pay for each account to hit the PSV requirements for the ranks she needs to fill. That would get her check back and depending on the plan payout, it might be worth it—the cost of the fake leg might be less than the bonus check she lost.

She might be able to replace a Copper on short notice. But not a Gold.

She’s out her paycheck for the month unless she’s willing to cheat.

The reason a company does this is so that the distributors will build out a downline across multiple legs. Which is a good thing! For a distributor to truly contribute to the growth of the company, they need to build out multiple legs with volume. In other words, the idea of this requirement comes from a good place. It just doesn’t work as is.

This is a requirement that is almost impossible to maintain. It’s an extreme, inflexible, forced structure. You must allow for flexibility in the organization. You must be careful not to create this kind of problem for yourself because it’s an easy mistake to make.

And remember, there’s nothing in the MLM compensation plan document that says this structure is forced on the distributor. It doesn’t matter that it’s not on paper. It’s the de facto truth. Every Diamond distributor needs 81 Coppers in a very specific structure to stay in the game. The issue with this example is that it’s using requirements that dictate structure of organization.

Luckily, organization requirement of structure is not the only type of structure requirement you can create! When you quit worrying about how those legs are structured, and just say you need those multiple legs, then you’re a lot better off. You do not want to dictate to your distributors how they’re supposed to build. What’s the other option?

Before we get started, let me just say that this example isn’t perfect, but it could succeed where the previous example failed.

For this example, let’s say Platinum is the top rank in the organization. We’ll look at the Platinum rank’s qualification requirements alone:

If a distributor can build a business like this—one where her volume is not all in one leg—you can be confident she did the work.

She’s not what we might call a “lottery winner.” If a distributor with a huge organization has all their volume in one leg, then it was somebody beneath them that built the organization. They got lucky. They won the compensation plan “lottery.” But that’s not possible in this example. She has three big legs. She didn’t get here by chance. She played a role in that. She has demonstrated beyond a doubt that she really built her business.

And, with a requirement like this, she’s not vulnerable to one bad apple in the downline. No one person can hold her hostage.

A structure of volume requirement dictates how much volume goes where in the organization. This type of design is quite popular. It works.

Implementing this rule alone makes a world of difference. But there are ways in which it could be better.

If you need help redesigning a structurally weak compensation plan, reach out to my wonderful team at MLM-CC.

Mark brings extensive experience to the industry. Mark began work in the direct selling arena in 1981. He has...